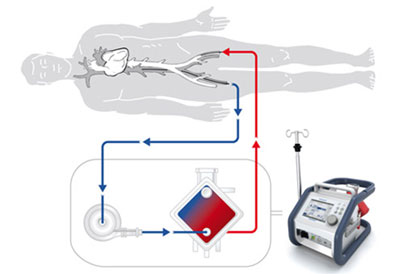 Extra-Corporeal Membrane Oxygenation ( ECMO) provides temporary life support to patients with severe but potentially reversible cardiac or respiratory failure. As the name implies, it refers to the delivery of oxygen by "extracorporeal" measures, and literally means by mechanical bypass that takes place outside of the body. Toward that end, an ECMO machine is a medical device that performs this task. In fact, it is very similar to a heart-lung machine that is used to continue the supply of blood and oxygen while the heart is stopped, such as during open heart surgery. ECMO therapy, however, is intended for patients whose heart and lungs cannot normally function on their own.

To initiate ECMO, cannulae are placed in large blood vessels to provide access to the patient's blood. Anticoagulant drugs, usually heparin, are given to prevent blood clotting. The ECMO machine continuously pumps blood from the patient through a "membrane oxygenator" that imitates the gas exchange process of the lungs, i.e. it removes carbon dioxide and adds oxygen. Oxygenated blood is then returned to the patient. Management of the ECMO circuit is done by a team of ECMO specialists that includes intensive care unit (ICU) physicians, perfusionists, respiratory therapists and registered nurses that have received training in this specialty.

ECMO is most commonly used in neonatal intensive-care units, for newborns in pulmonary distress. It is around 75% effective in saving the newborn's life. Newborns cannot be placed on ECMO if they are under 4.5 pounds (2 kg), because they have extremely small vessels for cannulation, thus hindering adequate flow because of limitations from cannula size and subsequent higher resistance to blood flow (compare with vascular resistance). Therefore, the device cannot be used for most premature newborns. Newborn infants are occasionally placed on ECMO due to the lack of a fully functioning respiratory system or other birth defect, but the survival rates drop to roughly 33%.

It may also be used to assist the transition from cardiopulmonary bypass to ventilation after heart surgery. There remain risks associated with the treatment but improved management plans and equipment have greatly reduced these. Successful treatment of a patient requires appropriate patient selection and management of the patient's overall condition, including the related technical issues. The place of ECMO in adult treatment has been less well established. It is used for cardiac support in association with cardiac surgery, particularly transplantation, but its role as an intervention for patients with severe respiratory failure and the corresponding evidence base for this has been less clear. With regard to safety, although this treatment carries overt risks, extracorporeal circuits are now relatively widely used in critical care and whilst there is likely to be a learning curve for any new centre, the technical requirements and clinical skills to provide ECMO are now well understood. Existing designated ECMO centres have been supportive of the development of any new centres.

Patients who require ECMO for respiratory failure will be those who have failed to respond to conventional ventilatory management but who are deemed to have potential for survival. Expert evidence has strongly suggested that a service should be based in a general critical care unit which can provide whole-system care for these patients. Intensivists are best placed to manage the patients but that on-site access to cardiothoracic surgical skills and perfusionists should also be considered key.

A full spectrum of supporting facilities is required, including imaging, laboratory and blood transfusion, as well as compliance with Extracorporeal Life Support Organisation ( ELSO) guidelines for the management of patients and staff training. There are differing views on the transportation of patients requiring ECMO. Some experts believe that patients should be stabilised and transported on ECMO, whilst others feel that transportation to the service on conventional ventilation is sufficient.

Europe's largest Extracorporeal Membrane Oxygenation (ECMO) centre is based at Glenfield Hospital in Leicester. Babies, children and adults are treated at the centre for reversible acute respiratory or cardio-respiratory disease.

ECMO centres in the UK include:

The units work in co-operation to provide a national co-ordinated service. Glenfield Hospital is one of the few ECMO centre's in the UK which offers treatment to adults. The hospital is registered with Extracorporeal Life Support Organisation (ELSO), is part of the CESAR Trial and is one of the world's most experienced hospitals in using ECMO. (Other Trusts that are part of the national co-ordinated service such as South Manchester are also now providing treatment to adults.)

Patients receive ECMO in the intensive care unit of a hospital, where medical personnel specially trained in respiratory therapy can continuously monitor them. The process begins with dispensing an anticoagulant to the patient to minimize clotting of the blood. This is necessary because the patient's blood must pass through a tube to the ECMO machine where it can be oxygenated by an artificial lung and be returned. The machine further simulates human respiration by removing carbon dioxide from the blood. The patient remains placed on the machine until his or her own heart and/or lungs can resume normal functioning.

The additional acronyms of VV and VA are used to differentiate between the two main methods of administering ECMO therapy. VV stands for veno-venous and indicates that the mode of entry into the body is a vein. This is usually the preferred method when the patient has suffered the loss of lung function exclusively. In contrast, veno-arterial, or VA, means that dual access by a vein and the carotid artery is necessary, and usually applies to patients with both lung and heart impairment.

VV ECMO can provide sufficient oxygenation for several weeks, allowing diseased lungs to heal while the potential additional injury of aggressive mechanical ventilation is avoided. It may therefore be life-saving for some patients. However, due to the high technical demands, cost, and risk of complications, such as bleeding under anticoagulant medication, ECMO is usually only considered as a last resort.

While many patients receive ECMO therapy due to advance disease or damage to the heart and/or lungs, it also has an application in neonatal emergency medicine. In fact, use of the EMCO machine in children's hospitals has saved many full-term infants with pulmonary or respiratory distress that fails to respond to other interventions. On occasion, EMCO therapy may also be given to premature infants born with underdeveloped lungs or other birth defect. The time limit for a newborn on ECMO is usually around 21 days. Dr. Thomas Krummel, Chairman of General Surgery at Stanford University, held the record for the longest survivor on ECMO at 62 days. This record was in turn broken recently on January 30, 2008, when a patient at NTU hospital, Taiwan survived a drowning accident after 117 days of ECMO application.

While ECMO is indeed lifesaving in many cases, there are certain risks associated with this therapy. ECMO can have dangerous side effects. The large catheters inserted in the baby's neck can provide a fertile field for infection, resulting in fatal sepsis. There is always a risk of infection at the access site, which may necessitate a regimen of antibiotics. The formation of air bubbles or blood clots in the tubing also presents a risk. Also, the fact that anticoagulant drugs are given to prevent clotting poses an additional risk of excessive bleeding. Finally, patients who undergo VA ECMO may have an increased risk of stroke.

In adults, ECMO survival rates are around 60%, and there are reports of patients being supported for over ten weeks. ECMO has yet to have proven survival benefit in adults with acute respiratory distress syndrome (ARDS). In VA ECMO, patients whose cardiac function does not recover sufficiently to be weaned from ECMO may be bridged to a ventricular assist device (VAD) or transplant.

In infants aged less than 34 weeks of gestation several physiologic systems are not well-developed, specially the cerebral vasculature and germinal matrix, resulting in high sensitivity to slight changes in pH, PaO2, and intracranial pressure, there is a risk of intraventricular haemorrhages; it has become standard practice to ultrasound the brain prior to administering ECMO.