Ultrasonography has been widely used for diagnosis since it was first introduced in clinical practice in the 1970's. Since then, new ultrasound modalities have been developed, such as Doppler imaging, which provides new information for diagnosis.  Elastography was developed in the 1990's to map tissue stiffness, and reproduces/replaces the palpation performed by clinicians.

Ultrasound elastography (EUS) is a method to assess the mechanical properties of tissue, by applying stress and detecting tissue displacement using ultrasound. There are several EUS techniques used in clinical practice; strain (compression) EUS is the most common technique that allows real-time visualisation of the elastographic map on the screen. There is increasing evidence that EUS can be used to measure the mechanical properties of musculoskeletal tissue in clinical practice, with the future potential for early diagnosis to both guide and monitor therapy.

The main idea is that whether the tissue is hard or soft will give diagnostic information about the presence or status of disease. For example, cancerous tumours will often be harder than the surrounding tissue, and diseased livers are stiffer than healthy ones.

Elastography, whose development started about 20 years ago, aims at imaging tissue stiffness, which provides additional and clinically relevant information. Mapping the stiffness can either be estimated from the analysis of the strain in the tissue under a stress (quasi-static methods), or by the imaging of shear waves, mechanical waves, whose propagation is governed by the tissue stiffness rather than by its bulk modulus. From a physics point of view, elastography aims to quantitatively image the 'Young's E modulus', the physical parameter corresponding to the stiffness.

This has two important advantages:

This simple and intuitive relationship between palpation and elastography calls for many applications of this “palpation imaging” such as breast tumour characterization and hepatic fibrosis staging where it was successfully been validated. Wherever palpation has been shown to have a clinical value, elastography can be seen as a relevant tool for diagnosis.

Moreover, although palpation requires a direct contact and can only be applied to superficial organs, many elastography techniques can also be applied to deep organs opening new possibilities of diagnosis. To assess the Young's modulus of the tissue, all elastography techniques rely on the same basis: an external force is applied to the studied tissue and the resulting movements are then followed. The external force can be classified according to two means of excitation: the static methods (or the quasi-static method) and the dynamic methods.

In the case of quasi-static elastography, a constant stress is applied to the tissue. The displacement and the generated strain ‘ɛ’ are then estimated using two-dimensional correlation of ultrasound images. The Young's modulus is then given via the Hooke's law (σ = E.ɛ), which links stress and strain in a purely elastic medium.

If the amount of force (stress) initially applied to tissue is known, elasticity can be determined. Elasticity (E) is measured in pressure units, pascals, or kilopascals (kPa). Most cancers feel stiffer on palpation because they have a lower strain value and a higher Young’s modulus. Although palpation is inherently subjective, stiffness can be measured with elastography, using a 3-step process:

In practice, since the applied stress is unknown, only the strain is displayed, this strain map is sometimes called the elastogram. This technique has the advantage of being easy to implement but the unknown stress distribution prevents any quantitative estimation of the local Young modulus in kilo-Pascal. Nevertheless, this method has been deployed on many commercial ultrasound diagnostic-imaging devices, as a simple yet indirect method to provide information on the tissue stiffness. 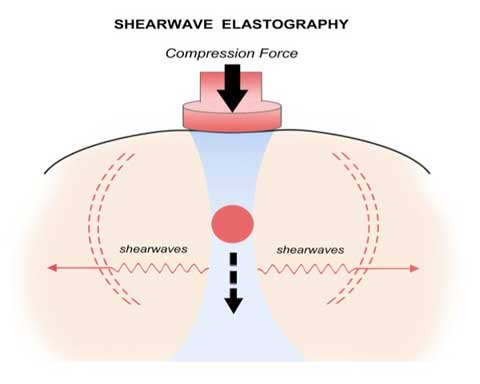 In dynamic methods, a time-varying force is applied to the tissue; it can either be a short transient mechanical force or an oscillatory force with a fixed frequency.

A time-varying mechanical perturbation will propagate as mechanical waves which in a solid body can be compressional waves or shear waves. The compressional waves propagate very quickly in the human body (∼1500 m/s), and at high frequencies, these waves, also known as ultrasounds, can be used to image the body. Shear waves, which are only generated at low frequencies (10 Hz to 2000 Hz) due to absorption at higher frequencies, propagate more slowly, and their speed (∼1–50 m/s) is directly related to the medium shear modulus (μ = ρ VS 2), where ρ is the density of the area (∼1000 kg/m3).

Elastography has the potential to differentiate complicated cysts form solid  masses. Shear-wave propagation does not occur in cysts and therefore cysts should have elastography values of zero and will appear mostly black or homogeneously blue on the colour overlay elastogram.  A bull’s eye artefact has also been described as a characteristic feature present in benign breast cysts, where central fluid may appear bright with a surrounding dark ring. Other investigators also describe a colour aliasing artefact that may be present in complicated cysts form solid masses, as well as a tri-laminar appearance. However, these findings should be used with caution and may only present within cysts evaluated with specific ultrasound units.

Ultrasound elastography is a relatively new tool that has the potential to improve specificity and sensitivity of benign and malignant breast lesions. Radiologists should be familiar with the different types of ultrasound elastography, as it varies across different manufacturers. Currently, there is no universal colour-coding standard. Therefore, depending on the manufacturer, stiff lesions may appear red, while soft lesions may appear blue, or vice versa.

Elastography features including size ratios, homogeneity, and lesion stiffness may be helpful to characterize masses seen on conventional breast ultrasound. Careful correlation of B-mode ultrasound, mammography and elastography is important because not all cancers appear stiff on elastography.

Future potential applications of elastography include its use in:

Compiled and edited by John Sandham.