Introduction
Endoscopy is a minimally invasive diagnostic medical procedure directly visualising any part of the inside of the body, using an endoscope. This is a long, tube-like optical viewing instrument with a lens and light source. It is used to view the internal body organs.

It may be inserted through the mouth, anus or small cut in the skin, which the endoscope can then be passed through. The instrument may have a rigid or flexible tube and not only provide an image for visual inspection and photography, but also enable taking biopsies and retrieval of foreign objects. Endoscopy is the vehicle for minimally invasive surgery.

Many endoscopic procedures are considered to be relatively painless and, at worst, associated with mild discomfort. Most patients tolerate the procedure with only topical anaesthesia of the oropharynx using lignocaine spray. Complications are rare (only 5% of all operations) but can include perforation of the organ under inspection with the endoscope or biopsy instrument. If that occurs then open surgery may be required to repair the injury.

An endoscope can consist of:

The first endoscope, of a kind, was developed in 1806 by Philip Bozzini with his introduction of a "Lichtleiter" (light conductor) "for the examinations of the canals and cavities of the human body". However, the Vienna Medical Society disapproved of such curiosity. An endoscope was first introduced into a human in 1822 by William Beaumont, an army surgeon at Mackinac Island, Michigan. The use of electric light was a major step in the improvement of endoscopy. The first such lights were external. Later, smaller bulbs became available making internal light possible, for instance in a hysteroscope by Charles David in 1908. Hans Christian Jacobaeus has been given credit for early endoscopic explorations of the abdomen and the thorax with laparoscopy (1912) and thoracoscopy (1910). Laparoscopy was used in the diagnosis of liver and gallbladder disease by Heinz Kalk in the 1930s. Hope reported in 1937 on the use of laparoscopy to diagnose ectopic pregnancy. In 1944, Raoul Palmer placed his patients in the Trendelenburg position after gaseous distention of the abdomen and thus was able to reliably perform gynaecologic laparoscopy.

The first gastrocamera was released in 1950 by Olympus Optical Co., Ltd. The device took pictures on monochromatic film using a small light bulb that was triggered manually. The device was of limited use, however, because it did not implement real-time optical capability. Olympus continued its development of endoscopes by incorporating fibre optics in the early 1960s, leading to the first useful endoscopes. In 1964, it released a gastrocamera guided by a fiberscope. A few articles claim that Dr.Basil Hirschowitz of Univ.Of Michigan, Ann Arbor discussed the endoscope in early 50's.

As endoscopic technology improved, so did the methods of gastrointestinal endoscopy. Owing primarily to the efforts of Dr. Hiromi Shinya in the late 1960s, GI endoscopy developed into what is more recognizable as today's colonoscopy. While many doctors experimented with techniques to take advantage of the new iterations of endoscopes, Dr. Shinya focused on techniques that would allow for successful operation of the endoscope by an individual, rejecting the common practice at the time of utilizing two people. Consequently, many of the fundamental methods and procedures of modern colonoscopy were developed by Dr. Shinya.

Dr. Shinya's other great contribution was to therapeutic endoscopy, in his invention of the electrosurgical polypectomy snare with the aid of Olympus employee Hiroshi Ichikawa. Shinya sketched his first plans for the device on January 8, 1969. He envisioned a loop of wire attached to the end of a colonoscope that would allow for easy removal of polyps during investigation by passing a current through the wire. By September of 1969, the first polypectomy using this device was performed. Polypectomy has since become the most common therapeutic procedure performed with an endoscope. (Sivak 2004) 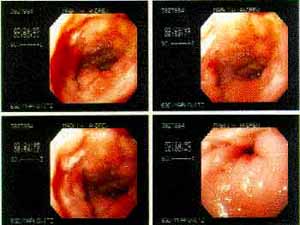 By 1980, laparoscopy training was required by gynaecologists to perform tubal ligation procedures and diagnostic evaluations of the pelvis. The first laparoscopic cholecystectomy was performed in 1984 and the first video-laparoscopic cholecystectomy in 1987. During the 1990s, laparoscopic surgery was extended to the appendix, spleen, colon, stomach, kidney, and liver. Wireless capsule endoscopy or Capsule Endoscopy is now approved in all the countries including Japan where government reimbursement will be available from Oct.2007.Capsule Endoscopy increases detection of Small Bowel tumours where traditional Endoscopy is not very efficient.

Endoscopy is a safe and reliable procedure. In rare cases, the wall of the organ being examined may be punctured. Immediate surgery is required to repair such damage. If a tissue sample is taken, there may also be some bleeding from the site. General anaesthetic or sedation may be needed to carry out endoscopy. These procedures carry risks of their own.

After the procedure the patient will be observed and monitored by a qualified individual in the endoscopy or a recovery area until a significant portion of the medication has worn off. Occasionally a patient is left with a mild sore throat, which promptly responds to saline gargles, or a feeling of distention from the insufflated air that was used during the procedure. Both problems are mild and fleeting. When fully recovered, the patient will be instructed when to resume his/her usual diet (probably within a few hours) and will be allowed to be taken home. Because of the use of sedation, most facilities mandate that the patient is taken home by another person and not to drive on his/her own or handle machinery for the remainder of the day.

Direct examination of the biliary tree with endoscopes has been a challenge since endoscopists began performing endoscopic retrograde cholangiopancreatography (ERCP) in the late 1960s. Direct...

The move towards minimally invasive surgical procedure has brought about a host of different of diagnosing and treating many conditions using scopes.  There are 2 main types of surgical...

Fluorescence is a luminescence that is mostly found as an optical phenomenon in cold bodies, in which the molecular absorption of a photon triggers the emission of another photon with a longer...